Last things first. The paintings shown here represent the outcome of a lifetime search for a full blooded articulation of being alive in this world today. This work would not have been arrived at without many years of development, often in the medium of sculpture. The present paintings unfold in a field of vision unrestricted by false reductionisms or artificial self- restrictions. They are a response to the poignant and threatened condition of life on Earth, and the sensation of being part of this wider situation oneself.

So this is a brief of my story and the story of the things that have shaped this outcome:

I was born in North Hertfordshire in an old town surrounded by countryside, but rapidly being engulfed by a ‘New Town’ and its surrounding estates. My family were poor but we had a large garden, with part of an old orchard at the far end. I was fascinated by animal life, particularly the denizens and environment of the orchard and our pond.

My father was a draughtsman and joiner (as had been his father and grandfather), and had survived being a Japanese POW partly due to his fitness as a cup winning cyclist, and because of being a valued maker. My mother, who was crippled by arthritis, was nonetheless a passionate gardener, and made beautiful watercolours of her flowers that had real insight and life. My brother and sister were both older: my sister did an A-level in art during my young childhood and so she had some art books and an extensive collection of postcards that I looked at for hours. My brother was into the environment; in the late sixties and early seventies I was hearing about pollution, de-forestation, the ozone layer and even global warming. A kind of fundamental questioning of what is of real value, and meaning in relation to appearances, began early.

My father was always bringing home drawing paper and pencils from the Educational Supply Association where he worked, and so I was able to draw copiously from the beginning, and went into the surrounding country to do this with my sister. But the rapid growth in housing estates meant that we had to walk further and further to see organic life. As I grew older I would go on my bike, but became ever more conscious of the swathe of surrounding ‘edgelands’, as they are called now, with their exciting and troubling combination of littering and careless interventions.

At secondary school I had a wonderful art teacher, Tom Honey, who frequently took me to London to see galleries and shows, and with whom I visited the nearby studios of Henry Moore, who I met twice. His first major bronze, the Family Group, was owned by my school, and one day I walked past as a film crew filmed Henry stroking the knees in appreciation of how the contact of the children had polished them. Mr Honey was a fine painter in his own right, and showed me the basic techniques of painting in oils when I was about twelve. This led to my doing a series of large (minimum five by four feet) panels in oil paints, some of which the school bought, even though they were done in school time with school materials. They were usually on show in the lobbies, and a plaster sculpture of mine could be seen a few feet from the Moore bronze in the Headmaster’s study window. In the Sixth form I painted a vast wall mural.

The only other subject of interest at school was English; I read hungrily and loved the poetry of words and was again very lucky in my teachers. I did just enough work in other subjects to qualify to go to Art School, which was initially a Foundation Course at St Albans College of Art and Design, built and run on Bauhaus lines. There I had a thorough grounding in Modernism, and was introduced to a lot of new ways of thinking and looking.

There was an important moment while in the subject of three dimensional design. I was drawing a tap with attached pieces, having been asked to do the impossible – represent it as if from every angle in one drawing. This led me to work in sculpture primarily. I went on to Canterbury College of Art, because it had more space and facilities for making than any other I viewed. I had two years of furious making, engaging and jettisoning every way of thinking about art in search of my own language and area of interest. In the third year I made the first body of work that was personal. I was feeling extremely isolated, separated from close relationships, and so took my purely physical feelings, and made a series of one-to–one scale forged steel linear sculptures that literally made free standing structures of these sensations. They had a terse visceral, or muscular, quality derived from the extruding of the metal, and inventively found three dimensional equivalents to how an appropriate pose felt. They were shown in my first solo show at Kent University Library, and one. ‘Waiting Place’, was shown at the ICA in London as part of the New Contemporaries.

I had a year out of art school, with a studio in London, then attended the Master’s Degree course at Chelsea School of Art. There I was able to build on the Canterbury work by incorporating colour and sheet metal forms. This allowed me to bring in represented natural external elements, a kind of three dimensional layering of imagery. The work became more poetic, and I published a collection of poems at the same time as the MA show, called ‘Necessary Areas of Blindness’.

During the next ten years, on a Fellowship, studios in London, getting involved in the running and re-shaping of the Florence Trust Studios, and large scale public commissions, I initially treated nature more simply, then flattened out the forms I was interested in, cut them out in sheet metal and manipulated them into three dimensions. With highly worked surfaces that drew heavily on my knowledge of the colouristic possibilities to be drawn out from metals, these works were again more poetic and abstract, and were an attempt to embody a Pantheistic view of the universe, shot through with animal energies.

It felt inevitable and intended when, over subsequent years, it gradually became clear that my interest was really in these surfaces, in entirely organic forms that reflected my belief in the multiplicity of living natural entities. This was my return to painting as my main medium, although it had never been completely abandoned. The long involvement in sculpture had been essential in giving me a strong sense of the forms I wanted to use on a flat surface, and the ability to find them with conviction.

There were side-steps, as usual, such as the Shade paintings. However, my environmental concerns (our separation from and destruction of nature) became joined with these beliefs and commitments, and the present work was gradually arrived at by a prolonged effort of concentration in the studio, with little or no time given to external, worldly ambitions.

Indeed, the ambition has all been in the work itself over a period of twelve or so years. The ongoing paintings develop consistently, and deepen in their treatment. Small sculptures are an extension of this work. Everything is underpinned by constant exploratory drawing.

A tightrope is walked between mimesis and abstraction, but the work always addresses the fundamental poignant challenges of the situations of life, inventively, and in a full-blooded exploration of what it is to be, to survive, to thrive and find meaning. 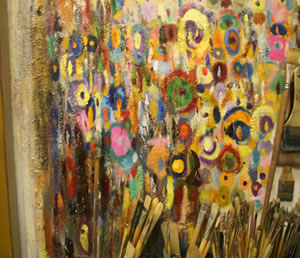